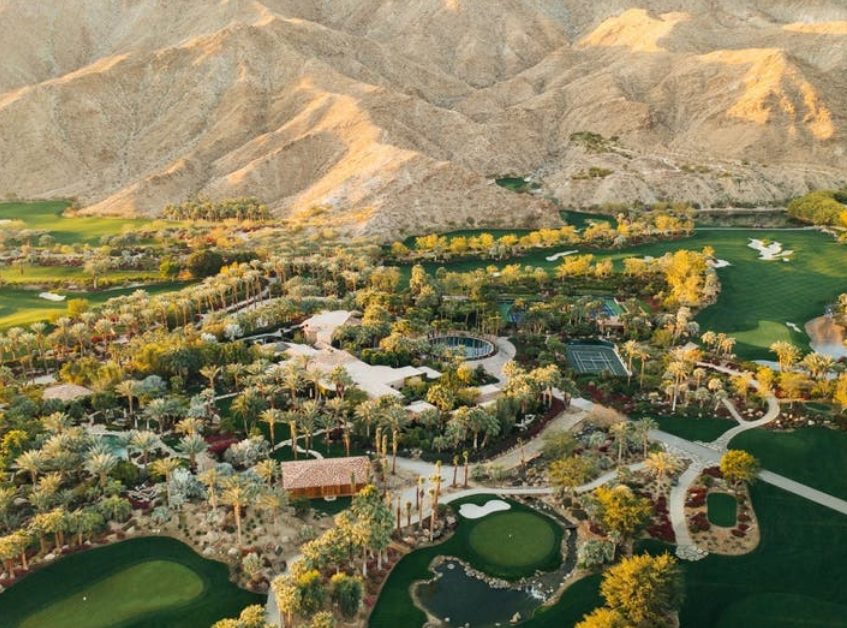 Details have been released about plans to turn Larry Ellison's private Porcupine Creek property in Rancho Mirage into an "ultra-luxury retreat."  Sensei, a "wellness retreat" company founded by Ellison and Dr. David Agus, announced the Rancho Mirage location will be branded under the Sensei name and will open in early 2022.  "As the brand's first standalone retreat, Sensei Porcupine Creek will convert [the] 230-acre private estate, nestled against the Santa Rosa mountains in Rancho Mirage, California, into an ultra-luxury retreat. The tranquil and intimate setting will feature a small number of hotel rooms in the former estate house as well as private villas clustered throughout the luxurious property," according to the announcement.

According to city of Rancho Mirage documents, the approved project will utilize approximately 191 acres of Ellison's 230-acre estate. A total of up to 50 studio, single-bedroom, and multi-bedroom units will be available to guests. Upgrades on the property include a modified main house, a new restaurant, dining deck, upgraded spa complex, additional retreat-related facilities, and a rerouted 18-hole golf course.  Sensei currently operates Sensei Lana'i, A Four Seasons Resort in Lana'i, Hawaii. Room rates range, but a search on the Sensei website shows the island location starts at about $650 per night. Rates for the Rancho Mirage property were not yet unavailable.  While the Sensei Porcupine Creek project will be a standalone retreat, the Lana'i location is a collaboration between Sensei, Four Seasons Hotels and Resorts, and Nobu Restaurants. The latter has among its famous founders actor Robert De Niro. Sensei is continuing its collaboration with Nobu for the Porcupine Creek project, according to the company.

Sensei is "known for leveraging technology to benefit health and delivering innovative evidenced-led wellness programs in breathtaking natural settings," the company said in Thursday's announcement. Sensei Porcupine Creek will offer similar spa, nutrition, movement, and other wellness and sports programs found at its Hawaiin location. Tennis and golf will be draws at the desert property, according to the company.
"Sensei is a trusted source for immersive wellbeing, given we have best-in-class practitioners and our approach is rooted in science and research and backed by technology," said Sensei CEO Kevin Kelly. "Now, with Sensei Porcupine Creek, we have the opportunity to offer our programming in a stunning luxury setting that takes advantage of its majestic desert location, which has long been a destination for health and wellness seekers."

Ellison purchased the desert property in 2011 for a reported $43 million from billionaire Tim Blixseth. He has since remodeled the estate to include an additional 16,000 square feet to the site's total building footprint. The upgrades have included spa treatment rooms, a tennis pavilion, a fitness center, a gatehouse and new villas, according to city documents.  Ellison is a tennis fan who has helped expand the sport in the Coachella Valley. He purchased the BNP Paribas Open and the Indian Wells Tennis Garden for $100 million in 2009. The annual BNP Paribas Open attracts the world's top tennis players and brings millions of tourism dollars to the valley each March (except in 2020 and 2021, when the event went dark due to the coronavirus). The tournament was recently rescheduled for 2021 to October. Ellison has hosted top players at Porcupine Creek during the event.

Porcupine Creek is located about a half-mile southwest of Highway 111, west of the Magnesia Falls Cove neighborhood.