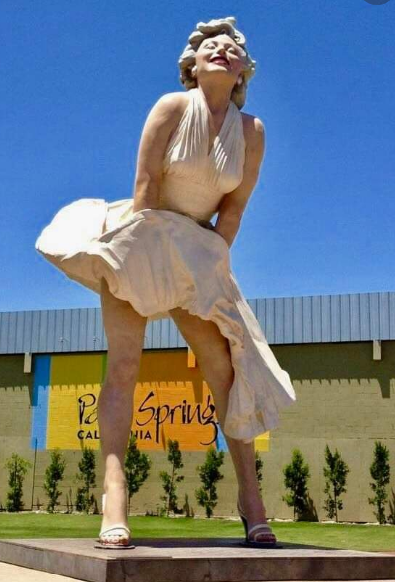 “Forever Marilyn” has, at last, made her way back to Palm Springs, with installation slated to begin today at her new home – the corner of Museum Way and Belardo Road.  Public Unveiling to be Held on Sunday, June 20, 2021.  P.S. Resorts – a nonprofit organization made up of local hoteliers to promote Palm Springs tourism through events and attractions – has announced the arrival of the 26-foot sculpture by artist Seward Johnson (l930 – 2020).  She will be installed onto a platform using a 60 ton crane, with legs and skirt at the base, and following that, the torso and head will be lifted and secured into place.  “Forever Marilyn” – inspired by the famous moment when Marilyn Monroe appeared with her white dress billowing aloft – made her initial Palm Springs debut on May 14, 2012 for a 2-year exhibit.  The sculpture was described as a ‘tourism phenomenon’ during its first placement in downtown Palm Springs, attracting a steady stream of visitors daily and generating millions of dollars in local retail sales and media coverage in support of Palm Springs’ number one industry – tourism.  In 1949, at age 22, Marilyn was “discovered” in Palm Springs at Charlie Farrell’s Racquet Club by William Morris talent agent, Johnny Hyde. Many famous photos of Marilyn were taken around the Racquet Club’s swimming pool. In the 1950s, she was a regular visitor to Palm Springs with her husband, baseball luminary Joe DiMaggio.  “She really put Palm Springs on the map worldwide,” said Aftab Dada, the chairman of P.S. Resorts. “Her return will complement the many other attractions and events that draw so many visitors to Palm Springs each year. Marilyn Monroe’s connection to Palm Springs is legendary, so it’s a natural fit to have her here tying into our community’s long and rich history as an escape for some of Hollywood’s most iconic personalities.”  “Marilyn Monroe is a Hollywood icon with a wonderful history in Palm Springs that we are excited to celebrate with residents and visitors alike,” said Mayor Christy Holstege. “We are delighted to welcome this free and fun attraction to the newly revitalized downtown – and we invite everyone to come experience the magic of “Forever Marilyn”.”  “The return of “Forever Marilyn” will be a huge economic boost to our small businesses, who have experienced a challenging year and a half due to COVID restrictions,” said City Councilmember Geoff Kors, who serves as liaison to the Palm Springs Chamber of Commerce and other business and tourism organizations. “The City Council is doing everything we can to support our local businesses on the road to recovery and we are excited to partner with P.S. Resorts to return Marilyn back to downtown Palm Springs.”  With his Icons Revisited series, sculptor Seward Johnson captures images that have held their impact over generations, becoming embedded in our collective subconscious. This series asks the viewer to consider why certain images stay with us, and how their meaning changes over time.  As always, the artist encourages the dialogue that public art should inspire, inviting varied interpretations and opinions. “Forever Marilyn” epitomizes fame. God Bless America, an homage to Grant Wood’s American Gothic, allows us to take a closer look at the couple, head to toe, well beyond Wood’s canvas. And his re-envisioning of the Mona Lisa brings forward many new perspectives.  Johnson’s “Forever Marilyn” made its debut in Chicago in 2011, and since then, has been exhibited in China and Australia and featured in international media stories including coverage by The Wall Street Journal, Time Magazine, The Washington Post as well as MSNBC, ABC, CBS and media outlets in France, India, Italy, Germany, Canada and the United Kingdom.  The “Forever Marilyn” exhibit in Palm Springs is made possible by P.S. Resorts along with a number of private contributors and community sponsors.  A public unveiling of the artwork is scheduled for Sunday, June 20, at 7:00 p.m. at the corner of Museum Way and Belardo Road. For more information, go to www.PalmSpringsForeverMarilyn.com

300 Films Being Screened At In-Person Palm Springs ShortFest.  The list of films was announced Monday for the event that is scheduled later this month.  Nearly 300 films from around the world have been selected to take part in this year's Palm Springs ShortFest, which will return as an in-person event later this month, organizers announced Tuesday.  What's billed as the largest festival for short films in the United States will be the first film festival in California to return with in-person screenings since the coronavirus pandemic began last year, according to the organizers.  ShortFest, slated for June 22-28 at the Palm Springs Cultural Center, will feature 295 films, including 32 world premieres. More than 5,500 films from 104 countries were submitted.  A complete list can be found at https://www.psfilmfest.org/.

Coachella Pre-Sale Tickets Sell Out In 4 Hours.  The tickets were quickly snatched up. Event promoter Goldenvoice said fans can still sign up for the waitlist.   Pre-sale tickets for the Coachella Valley Music and Arts Festival set for next April sold out soon after going on sale Friday.  Coachella, which typically brings upward of 250,000 fans over two weekends to the Empire Polo Club in Indio, is slated for the weekends of April 15-17 and April 22-24.  Additional tickets typically go up for sale for Coachella Valley residents closer to the festival dates, but additional information about that process were not announced.  Coachella's three-day country music sister festival Stagecoach is set for April 29-May 1 of next year. Tickets for that festival have not yet gone up for sale.  Lineup information for either music festival was not released.  The waitlist for the Coachella festival can be accessed at www.coachella.com.  More information about Stagecoach can be found at www.stagecoachfestival.com.